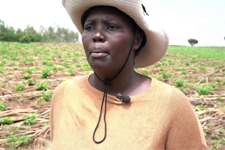 “After getting an opportunity of professional internship in Israel, we come back with different skills, we did not go to look for job rather we immediately rented land  in Bugesera district and  we starting  chili and French beans farming” Ange Benie and Charlotte said.

One of the reason that motivated them to rent land in Bugesera district which is different from their residence district was “a friend who shown them a good area which is close to Kigali and with presence of water for irrigation because the land is near a small lake called Rumira. Immediately they decided living and working there”.

The main challenges that they faced when they started the farming projects was lack of insufficient equipment such as quality water pump, pesticides .., all these challenges prevented them from doing professional farming.

After receiving grants from UNDP through MINAGRI, it helped them to boost their businesses, such as expanding area from 2 Ha to 3Ha both of them, and both purchasing water pump generators.

They thank UNDP through MINAGRI for this grant which helped in lifting up their projects, improving their livelihoods, and sensitizing other youth to start doing agribusiness as a way to reduce unemployment.